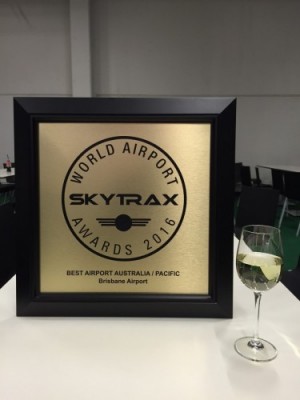 Edward Plaisted, CEO of Skytrax, said, "It is a fabulous achievement for Brisbane Airport to be ranked the Best Airport in the Australia / Pacific region. Not only outshining the other major airports in the region, Brisbane Airport is clearly delivering some of the best airport service standards and satisfying customers."

Julieanne Alroe, BAC CEO and Managing Director, said there was no greater accolade than being voted the best by global travellers in the world’s most prestigious industry awards.

“We are proud of this achievement as BAC is a fierce advocate of our city and state and being recognised as one of the best in the world, against strong competition, provides valuable endorsement for Brisbane and Queensland in the competitive global aviation and tourism industry.

“While BAC has worked hard over the last few years to improve facilities, processes and the passenger experience at our terminals, it’s vital that the efforts of the airlines, government agencies, retailers, contractors, and our wonderful volunteer Ambassadors, are recognised as being essential to BNE ranking so highly,” Ms Alroe said. “This is a win for everyone who works at Brisbane Airport.”

“Every single one of the more than $3.8 billion we expect to spend over the next decade is a dollar spent building the Queensland visitor economy,” Ms Alroe said.

“As the main gateway for visitors to Brisbane, the Gold Coast, the Sunshine Coast, the outback, the Tropical North, the Whitsundays and beyond, Brisbane Airport aims to provide the very best welcome and farewell for visitors and this award encourages us to do even more,” she said.

The Skytrax World Airport Awards are the most prestigious accolades for the aviation industry, voted by customers in the largest, annual global airport customer satisfaction survey. The survey and awards process is independent and free of any airport influence or interference in final results.

The Awards are based on 13.25 million airport survey questionnaires completed by 106 different nationalities of airline customers during the survey period. The survey operated from June 2015 to February 2016, covering 550 airports worldwide and evaluating traveller experiences across different airport service and product key performance indicators - from check-in, arrivals, transfers, shopping, security and immigration through to departure at the gate. The World Airport Awards are a global benchmark of airport excellence, and widely known as the Passengers Choice Awards.