Vietjet Air commits to Brisbane as its first Australian port

Vietjet Air commits to Brisbane as its first Australian port 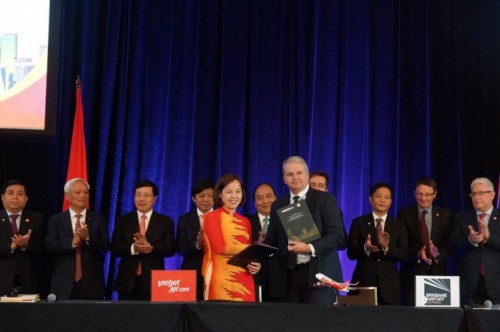 It is the first international low cost airline to join the Brisbane Airport family, offering a new destination from one of the Association of Southeast Asian Nation’s (ASEAN) fastest growing economies.

The announcement was made following the signing of a Memorandum of Understanding (MOU) between Brisbane Airport Corporation (BAC) and Madam Nguyen Thi Thuy Binh, Vietjet Vice President at the Australia – ASEAN Summit yesterday afternoon.

Julieanne Alroe, BAC CEO and Managing Director, said travel between Queensland and Vietnam has been growing at an average 8 per cent per annum over the last five years, with the new services set to further stimulate the market.

“It makes perfect sense for Vietjet Air to choose Brisbane, Queensland as it very first Australian port for direct flights given Ho Chi Minh City is one of Brisbane’s top five markets without direct services.

“The economic growth of Vietnam is impressive, with these new services facilitating further education, tourism, and investment and trade opportunities with Vietnam, not only benefiting Brisbane, but regional Queensland as well.

“We look forward to welcoming Vietjet Air to the Brisbane Airport family and further strengthening the ties between Queensland and Vietnam,” Ms Alroe said.

“We are proud to be the pioneer airline to operate direct services from Vietnam to Brisbane, a dynamic business centre with friendly people, pleasant weather and living conditions that is very attractive for international travellers, especially those from Asia.

“Vietjet is committed to making a new and lively aviation wave by offering brand new and friendly services and safe flights, thus contributing to the development of tourism, investment and trade exchange between Vietnam and Australia,” she added.

The Vietnamese community is the 7th largest ethnic community in Brisbane with the Vietnamese student market the 11th largest education market in Queensland. Vietnam is Queensland’s 9th largest merchandise export destinations, moving from 24th position in 2012–13. Airfreight between Vietnam and Queensland has tripled in the last four years.