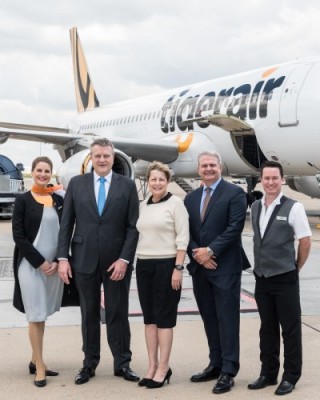 A THIRD A320 AIRCRAFT TO BE BASED IN BRISBANE, CREATING OVER 50 JOBS IN QUEENSLAND.

Tigerair Australia has today announced that a third A320 aircraft will be based in Brisbane from late March 2017 to facilitate a number of additional and new services from the airline’s Queensland base and in the process create over 50 additional jobs in Brisbane.

From 1 June 2017, Tigerair will operate the only low cost services between Brisbane and Perth with a standard schedule of four weekly return services, increasing up to six times weekly in peak periods such as school holidays.

Four weekly return services between Brisbane and the Whitsunday Coast will commence from 23 March 2017.

Tigerair Australia CEO Rob Sharp says today’s announcement is significant for Queensland tourism and the economy as the airline continues to respond to consumer demand for more services to and from Queensland.

“The sunshine state is an integral part of our network with over 70% of all Tigerair domestic services already touching Queensland. That number is set to increase with all the new services announced today.

“We are confident our new services will prove popular with our core market of budget and leisure travellers, whilst at the same time stimulating numerous benefits for the city of Brisbane by way of increased tourism expenditure and job creation. “

“We thank Australian consumers and our tourism and airport partners for continuing to embrace Tigerair as the airline goes from strength to strength, delivering on our promise of providing affordable and reliable air travel with great customer service.

“Put simply, the more people that choose to fly Tigerair, the more opportunities there are for expansion of services in the future.”

Julieanne Alroe, Brisbane Airport Corporation (BAC) CEO and Managing Director said, “Tigerair has made an enormous investment in our city and state by committing an additional aircraft to Brisbane and introducing these new services, providing travellers with more choice, flexibility and competitive pricing than ever before.

“The importance of this investment, which will bring significant positive returns to our economy, cannot be over-estimated.

“I congratulate CEO Rob Sharp and the Tigerair team on today’s announcement and we look forward to supporting these new operations and building on the strong partnership that’s already developed between BAC and Tigerair,” Ms Alroe said.

More details on the ‘Showtime in Brisvegas’ sale on now are listed below.

*Light Fares are per person in AUD and include GST. Payments made with credit or debit cards are subject to a card payment fee of between 0.86% and 1.33% per booking. Payments made with PayPal or interest free will attract a booking and service fee which is detailed at point of purchase. Payments made with POLi do not attract a payment fee. Add $25 when booking domestic travel by phone or at the airport. Fares are non-refundable. Bookings may be changed by paying the fee and any applicable fare difference in accordance with our conditions of carriage, as published on our website on the day you request your change. For Light Fares, additional charges apply for optional extras such as checkedin baggage travel insurance and reserved seat selection. Other conditions apply. Go to www.tigerair.com.au for full terms and conditions. Fares are on sale from 1.00pm AEDT 13/10/16 until midday AEDT 18/10/16, unless sold out prior.