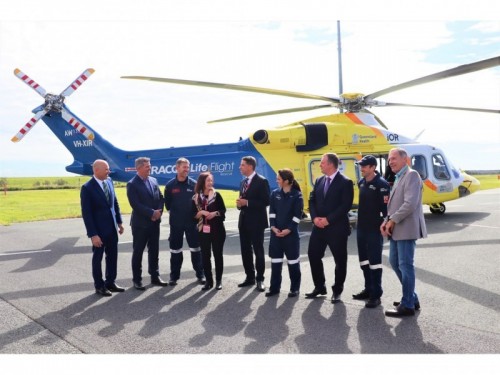 The 14,470m² multi-tenanted facility will be located between Brisbane Airport’s two runways at the Airport North Precinct and will accommodate the Royal Flying Doctors Service (RFDS), LifeFlight, and Queensland Health facilities.

It will feature new patient transfer facilities, state-of-the-art hangars for fixed and rotary wing aircraft, administration areas, and a medical base for regional patient and donor transfers.

Regional Queenslanders will have the certainty of better access to medical treatment for the next decade as a result of a new ten-year deal between the Queensland Government and the Royal Flying Doctor Service (RFDS).

Treasurer and Minister for Trade and Investment Cameron Dick announced the additional $334 million in funding for the deal ahead of this month’s State Budget.

“The Royal Flying Doctor Service is officially recognised as a Queensland Great, and rightly so,” the Treasurer said.

“In a state the size of Queensland, the RFDS plays a vital role in ensuring that no matter where Queenslanders live, they can get access to the medical services they need.

“The logistics and planning needed to operate the RFDS are considerable, so today’s announcement provides the certainty the organisation requires to meet the future needs of Queenslanders.

“This future-proofing infrastructure is about us continuing to ensure Queenslanders have access to the care they need, no matter where they live.

Construction of the new Queensland Regional Aeromedical hub will support an estimated 200 jobs and a further 220 direct jobs that will contribute an annual economic benefit to the State of $100 million.

With more than half of Queensland’s five-million-plus population living outside of the greater Brisbane area, the Queensland Regional Aeromedical Base will play a critical role in connecting and supporting the regions.

“As the heart of the Queensland network for patient retrieval and medical transfers, the Queensland Regional Aeromedical Base at Brisbane Airport will enhance the network of aeromedical bases located throughout regional Queensland.

“A world-class development like this is not only a reflection of Brisbane Airport’s location and amenity, but also of our ability to deliver the best aeronautical capacity thanks to our new runway,” Mr de Graaff said.

“Seconds can quite literally be the difference between life and death when it comes to aeromedical services.

“Brisbane Airport was the logical choice for such a facility, as we have the slot capacity and can provide the quickest possible response time to get planes and helicopters in the air and on their way to Queensland’s major hospitals.

“We are very pleased to have Queensland Health, RFDS, and LifeFlight on-board and look forward to working with them on this new facility that will provide critical medical care to Queenslanders who live outside of Greater Brisbane.”

Construction of the facility will support an estimated 200 jobs and a further 220 direct jobs that will contribute an annual economic benefit of $100 million.

The Queensland Aeromedical Base is scheduled for completion in April 2024.