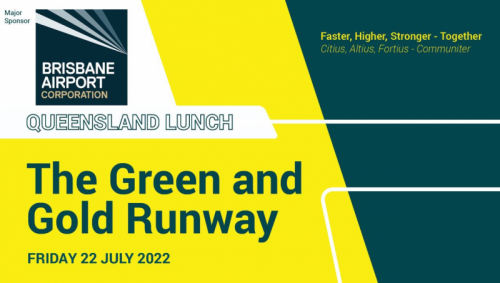 As history beckons, Brisbane Airport Corporation is delighted to be the Major Sponsor of the Green & Gold Runway Lunch, with Queensland beginning a decade long countdown to the 2032 Brisbane Olympics & Paralympic Games.

Eight hundred guests will gather at the Brisbane Convention and Exhibition Centre today as some of the biggest names in Australian sport and business discuss how Brisbane, Queensland and Australia can leverage the Olympic and Paralympic opportunity.

“We know our role is critical. Brisbane Airport will be the first and last impression for all who visit the Brisbane 2032 Olympic and Paralympic Games,“ according to Brisbane Airport Corporation Chief Executive Officer, Gert-Jan de Graaff.

·       Hon Annastacia Palaszczuk MP, Premier of Queensland and Minister for the Olympics

The event is proudly presented by the Property Council of Australia, Brisbane Airport Corporation, ASM Global and The Courier-Mail in conjunction with the Australian Government, Australian Olympic Committee, Brisbane City Council, Council of Mayors (SEQ), Paralympics Australia and the Queensland Government.

The decade long focus on Brisbane promises to generate a magnitude of economic benefits for Brisbane and Queensland and will create an opportunity to deliver generational social, environmental and place-making change.

“The Green and Gold Runway concept is unique in the history of the Olympics. Never before has a host city had so long to lock-in the benefits of hosting the Games.”