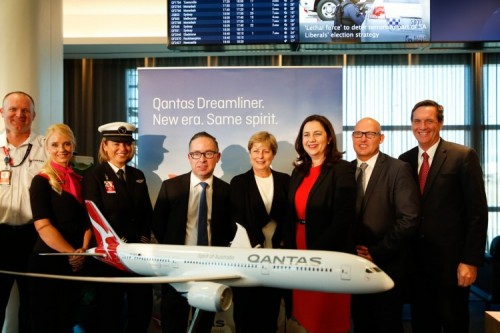 In a major win for the city and state, Qantas Airways has chosen Brisbane Airport (BNE) as its new base for four Boeing 787 Dreamliner aircraft.

The agreement was sealed as part of a coordinated proposal by the Queensland Government, Brisbane Airport Corporation, Brisbane Marketing and Tourism Australia.

The new Boeing 787 base will expand Qantas’ international service renaissance at Brisbane Airport, which has seen new Qantas flights to Tokyo, Christchurch, Port Moresby and capacity growth on several other routes, as well as new code-shares on partner airlines at BNE in the last 24 months.

“These new aircraft have a flight range of nearly 16,000 kilometres (8,500 nautical miles), opening up a new world of opportunities, securing opportunities in the tourism, trade, investment, business and education sectors for many years to come.

“For Queensland travellers it will mean having access to more non-stop ultra-long haul routes direct from Brisbane in an aircraft that offers unparalleled passenger comfort, while also positioning Brisbane as the new gateway for access into North America.

“It is a significant and very timely commitment by Qantas to base four of these state-of-the-art aircraft in Brisbane, particularly given Brisbane’s new runway will open in a few short years.

“While other ports are reaching maximum capacity, the new runway will double flight capability to and from Brisbane, positioning Brisbane and Queensland as the logical future major gateway to Australia.

“I acknowledge the state government’s collegiate approach to securing such a great opportunity for Queensland which shows foresight in realising opportunities for the US market for our city and state,” Ms Alroe said.

Last financial year Brisbane Airport recorded its strongest international growth of 7 per cent over the last decade, with today’s announcement by Qantas further positioning BNE Airport for strong growth in years to come.