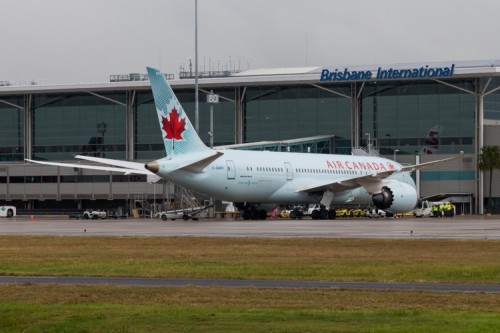 Brisbane Airport’s International Terminal was today awash with red and white flags, maple leaves and a giant snow globe, with guests treated to a visit by a Canadian Mountie and First Nation Calgary Princess in celebration of the arrival of Air Canada’s first flight from Vancouver.

Today’s launch marks the beginning of the year round, daily direct services between Vancouver and Brisbane, heralding a new era for Queensland and Canada.

Arriving on the first flight was Air Canada’s Vice President of Global Sales, Duncan Bureau, as well as CEO and President of Vancouver Airport, Craig Richmond, who made the 14.30 hour trans-Pacific journey to meet and farewell the airline’s first Queensland passengers headed to Vancouver on the inaugural flight.

Julieanne Alroe, BAC CEO and Managing Director, said the importance of today’s launch for tourism, business and the city and state’s economy could not be underestimated.

“Canada-Australia business ties are of increasing significance with our two economies sharing many major industries, like mining, agriculture and tourism, but complementing each other by operating opposing growing and tourist seasons,” Ms Alroe said.

“Every new international flight into Brisbane injects millions into our economy each year and it’s not just South East Queensland that benefits.

“Brisbane is a major gateway to Australia and we know that the majority of international travellers through Brisbane Airport travel on to other Queensland regions by road or via our extensive domestic flight network spanning every state and 42 destinations across Australia.

“Canadian visitors in particular are some of the longest staying visitors to Queensland, on average spending nearly a month here per person. Canadians are great at getting off the beaten track and having a wonderful impact on the small towns and destinations all across the state.

“On the flip side, a direct flight straight from Brisbane to Vancouver is great news for Queensland travellers with Canada’s famously rugged and beautiful landscape now a comfortable and convenient direct flight away.

“So a win for Brisbane Airport is a big win for travellers as well as businesses throughout the region and the entire state of Queensland,” Ms Alroe said.

"Air Canada is looking forward to continuing to collaborate closely with Brisbane Airport, the Queensland Government and all our valued partners to promote our new service from Brisbane to Vancouver and beyond," said Mr Smith.

Tourism Minister Kate Jones said the arrival of flight AC035 was a significant milestone for Brisbane and Queensland as the first daily service between Brisbane and Vancouver.

“We expect this service to generate up to $56 million for the Queensland economy and bring an additional 90,000 visitors to Queensland,” Ms Jones said.

“This new daily flight is a strong vote of confidence for Queensland’s $23 billion tourism industry from a key international visitor market.

“These services are vital to growing the tourism industry by bringing people to the state, sharing our unique and amazing experiences and of course our incredible lifestyle.”

“Brisbane is an energetic and emerging global gateway that is entrepreneurial, innovative and increasingly making its presence felt as a new world city,” Cr Quirk said.

“We are also a friendly, welcoming and lifestyle-orientated city at heart of one of the world’s great tourism regions, ready to offer a warm welcome to our North American leisure and business visitors.”

Canadian travellers to Queensland were up 12 per cent in 2014 with the daily service expected to increase inbound visitation through strong corporate links in the resource sector as well as tourism.

Being the largest domestic airline in Canada, the service provides unparalleled connectivity to Air Canada’s domestic network of 64 Canadian cities, along with 52 destinations in the United States and 78 cities in Europe, the Middle East, Asia, Australia, the Caribbean, Mexico, Central America and South America.