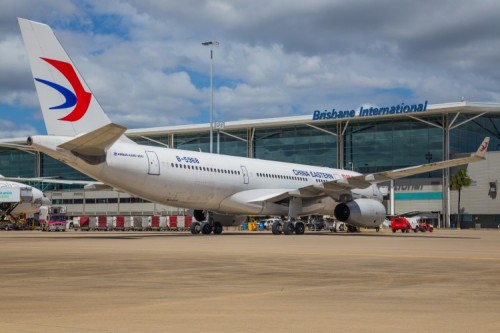 Just nine months after launching four times weekly flights between Brisbane and Shanghai, China Eastern has confirmed it will boost services to daily from November 2017.

Julieanne Alroe, Brisbane Airport Corporation (BAC) CEO and Managing Director, welcomed the announcement saying the new services would not have been secured without the financial support provided by the State Government and matching funds from industry partners.

“It is gratifying to see this hard work and collaborative effort to attract new airline services come to fruition.

“Teamwork and pooling resources is the key to ongoing success in promoting our city and state and securing new direct routes between Queensland and China.

“I would like to thank the State Government and our consortium partners for their support and we look forward to further success in building international connections through this innovative approach.”

China is currently the second largest international visitor market for Brisbane Airport, averaging 14 per cent growth per year in the last five years, equating to 310,000+ inbound passengers from China each year.

Ms Alroe added, “I extend my congratulations to the China Eastern team for its commitment to Queensland.

“New daily flights will help grow this important market, providing benefits for every sector of our economy, from business and investment to tourism, trade and education.

“Daily flights allow the flexibility that business travellers and holiday makers need when planning their travel, including better timings for various connections across China and the world.

“As a major gateway to Australia we also know that many inbound international passengers arriving at Brisbane Airport also travel on to other Queensland regions by road or via our extensive flight network spanning 50 domestic destinations across Australia,” she said.

China Eastern Airlines is China’s second largest airline, Shanghai’s home carrier and one of the ‘Big 3’ national airlines of China with a fleet of more than 440 aircraft. It offers a premium full service product trusted by high yielding Chinese business and leisure travellers who now spend $1.2 trillion globally on tourism.

China Eastern will operate one of its new modern Airbus A330-200 aircraft on the route with the new services leaving Brisbane at lunch time and arriving into Shanghai during the early evening, with return flights operating overnight to arrive back in Brisbane in the morning.

From its base at Shanghai’s Pudong International Airport, China Eastern’s network connects travellers to every corner of China, with services to 217 destinations around the globe including Europe, North America and throughout Asia, with flights operated in codeshare with Qantas, so passengers can earn Frequent Flyer Points on the service.