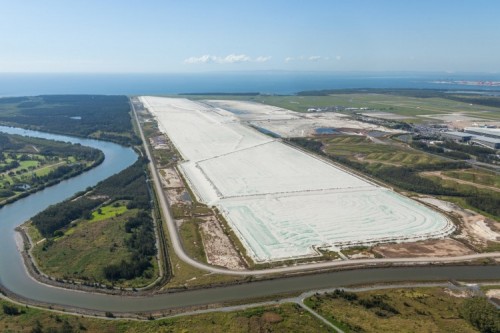 Brisbane Airport’s new runway is on track to open in 2020 with the award of the Airfield Works contract to Skyway, a joint venture (JV) between BMD Construction Pty Ltd and CPB Contractors Pty Limited, a member of the CIMIC Group.

Both companies have a strong connection to Queensland and to Brisbane Airport.

Julieanne Alroe, Brisbane Airport Corporation (BAC) CEO and Managing Director, said, “Given the long history of this project which had its earliest planning stages in the 1970s, it is a significant milestone to announce today the successful contractor for the largest, final and most expensive package of works to bring Brisbane’s new runway to life.

“That Skyway joint venture partners have a long and storied history with Brisbane Airport, and such strong local pedigree, is particularly pleasing,” Ms Alroe said.

“The new runway was the most important piece of aviation infrastructure being built in Queensland and the biggest undertaken by BAC since the airport was privatised in 1997.

“It is a $1.2 to $1.3 billion privately funded investment that, when operational in 2020, will provide unlimited opportunities for the growth of our city, state and, ultimately, our nation.

“To put our investment in this project into context, BAC bought the entire airport for $1.38 billion, almost 20 years ago to the day.

“Over the past two decades, BAC has privately invested more than $3.4 billion in upgrading and expanding this critical piece of public infrastructure, with a great deal of this development geared to increasing capacity and improving the travelling experience for airline passengers.

“Importantly, through privatisation, not one cent of the billions of dollars invested in this critical infrastructure has come from the government purse,” Ms Alroe said.

Adolfo Valderas, CIMIC Group Chief Executive Officer, said, “BMD Constructions and CPB Contractors, as the Skyway JV, have brought together a team of expertise and agility to ensure an efficient and cost-effective works program.

“We are committed to ensuring that the project’s planned operational, social and economic benefits are achieved through innovative and sustainable solutions – and that we deliver a quality asset of long-term value for Brisbane Airport and the people of Queensland,” Mr Valderas said.

While BMD Construction is ‘book-ending’ the new runway’s construction, having been a key contractor in the first phase of the project, Joint Venture partner, CPB Contractors, is book-ending the construction of Brisbane Airport proper.

In the 1980s CPB Contractors was the managing contractor for the construction of the airport as we know it today, overseeing delivery of the runway, taxiways, the Domestic Terminal and the iconic air traffic control tower, all of which opened in 1988.

BAC’s investment in this final stage of works, including the Airfield Works contract, is worth more than $500 million and will take close to three years to complete. It is an enormous undertaking with the vast majority of large value components being locally sourced.

South East Queensland – 89 per centPeak labour resources - up to 90 per cent is anticipated to be sourced locally:

How Brisbane’s New Runway will be built

b.place light cans in hole and connect each of them up to their own power source to the side of the runway (part of the 40km of electrical wiring),

c.build Airport Lighting Electrical Rooms and connect to control systems in the tower

d.construct HIAL structures into Moreton Bay and at the southern end of the runway

About CPB Contractors: CPB Contractors is the CIMIC Group’s construction company and a leading international construction contractor, with operations spanning Australia, New Zealand, Asia, India and Papua New Guinea. The CIMIC Group Limited (ASX: CIM) is one of the world’s leading international contractors and the world’s largest contract miner. CIMIC Group has operations that have been in existence since 1899, was listed on the Australian Securities Exchange in 1962 and has its head office in Sydney, Australia. CIMIC provides construction, mining, mineral processing, engineering, concessions, and operation and maintenance services to the infrastructure, resources and property markets. It operates in more than 20 countries throughout the Asia Pacific, the Middle East, North and South America and Sub-Saharan Africa and, as at 31 March 2017, employed approximately 51,300 people directly and through its investments.

About Brisbane Airport Corporation: BAC is the operator of Brisbane Airport (BNE), the premier gateway to Queensland and the third largest airport in Australia by passenger numbers. It is a proud, public, un-listed Queensland company, helping employ thousands of Queenslanders and creating economic opportunities for the state and city of Brisbane. Operating 24 hours a day, seven days a week, BNE has two major terminals servicing 31 airlines flying direct to 80 national and international destinations. Nearly 22.7 million passengers travelled through the airport in 2016. BNE is consistently recognised as a leading airport including being voted Best Airport in Australia/Pacific together with the Best Airport Staff Service in Australia/Pacific region by air travellers in the 2017 Skytrax World Airport Awards. BNE was also named Australasia’s Leading Airport in the 2016 World Travel Awards and Capital City Airport of the Year two years running (2014 and 2015) in the Australian Airports Association National Awards. BNE is the only airport in Australia to achieve the highest rating for quality of service for 13 consecutive years in the ACCC Airport Monitoring Report.