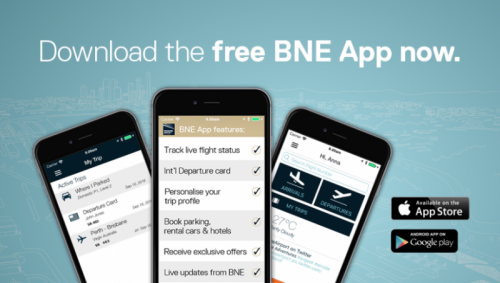 Brisbane Airport’s upgraded App is sleeker than ever with the latest version delivering several new features, as well as an expansion of the language set from English and simplified Chinese to now include Japanese and Korean.

The BNE App is an essential information portal for international travellers to Brisbane, providing instant access to helpful information about departures and arrivals, shopping and dining, terminal maps, directions and navigation to/from the airport and the greater South East Queensland region, and things to do, see and enjoy in Brisbane and beyond.

“With Brisbane and Queensland experiencing an ever growing visitors market from Asia, we know the new Japanese and Korean language options, in addition to simplified Chinese, will be very helpful to international travellers.

“Being able to connect with international visitors via the BNE App before they arrive at the airport can help to reduce levels of anxiety often associated with travelling to a new destination,” Mr Hellemons said.

Brisbane Airport’s world-first Digital Departure Card, built within the App, also gives passengers the ability to enter and save personal information for the Departure Card onto their mobile device prior to arrival at the airport.

This information is converted into a QR code that is scanned and printed at a kiosks located in the International Terminal. The personalised and custom printed card is then signed by the passenger and collected by Customs officers during the normal departure process.

“Filling in data for the passenger departure card on the BAC App in advance, rather than filling it in on the cards at the airport, makes the process easier especially for international travellers where English is not their first language,” Mr Hellemons added.