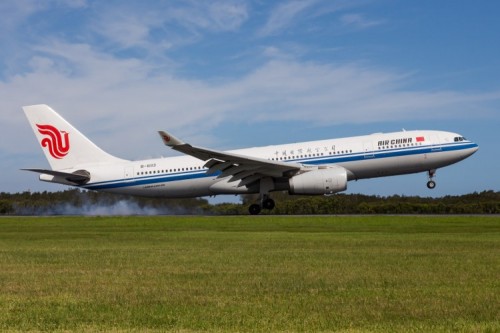 In an exciting finale to 2017 new direct Air China flights between Beijing and Brisbane touched down at Brisbane Airport (BNE) today, establishing a critical link between Queensland’s international gateway city and the capital of the People's Republic of China.

The four times weekly flights, arriving and departing Brisbane on Mondays, Wednesdays, Fridays and Sundays, is expected to further boost Chinese visitation to Queensland, a market that experienced 9 per cent growth for BNE in FY17.

The service has been acquired for Brisbane as a result of the Queensland State Government ‘Connecting with Asia’ Fund, supported by consortium representatives from Brisbane Airport Corporation (BAC), Brisbane Marketing, Gold Coast Tourism, Tourism Events Queensland, Tourism Whitsundays and Tourism Australia, among others.

Julieanne Alroe, BAC CEO and Managing Director, said today’s launch was another significant step for the city and state in positioning Brisbane as a major Asia Pacific centre.

“The Chinese visitor market is currently the second largest for Brisbane Airport, with around 350,000 Chinese passengers travelling through the airport last financial year.

“These direct Air China flights will help grow this important market which will have flow on benefits for every sector of our economy, from business and investment to tourism, trade and education.

“As a major gateway to Australia we know that many international passengers arriving at Brisbane Airport also travel on to other Queensland regions by road or via our extensive flight network spanning 52 domestic destinations across Australia.

“This is an exceptional result for the ‘Connecting with Asia’ Consortium all of whom are working tirelessly in this space to attract new airlines such as Air China to our city and secure additional direct services or capacity on existing routes.

“Quite simply, these new services would not have been secured without the financial support provided by the State Government and matching funds from industry partners.

“I congratulate Air China on this auspicious day and look forward to building a long and successful partnership with the Air China team,” Ms Alroe said.

Mr Rui Jei, General Manager of Air China in Australia, said, “This is an exciting era for Air China and Queensland, Brisbane City and Brisbane Airport.

“The new direct service conveniently allows Northern Chinese visitors to the warm sunshine Queensland to enjoy its beaches and the beautiful tropical scenery.

“As our saying to our passengers, ‘Your World, Our flight’,” Mr Rui said.

“In addition to attracting more visitors to our New World City, the new Air China flights will increase trade and investment opportunities and entice more international students to study in Brisbane, helping us grow our economy and create more jobs,” Cr Quirk said.

“The inaugural flight also arrives just a few months before we host 1,000 key airline, airport and tourism delegates at Routes Asia 2018, the leading aviation route development forum for Asia that will help us tap into more tourism and aviation opportunities for Brisbane.”

Air China is one of the few airlines to operate to all six inhabited continents. Via Beijing, Brisbane travellers will be able to travel on Air China to 18 points in Europe, nine points in North America, and almost anywhere in China and Asia on their comprehensive network.

Operated with an Airbus A330-200 aircraft, the new flight offers 207 economy and 30 business class seats. The flights will arrive from Beijing at 3.10pm and depart Brisbane at 7.30pm.