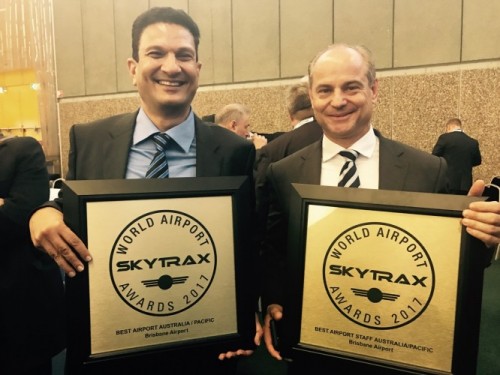 Skytrax World’s Top 100 Airports list was also released, with BNE rising from 17th in the world to 16th, and 5th in the size category of 20-30 million passengers annually.

Julieanne Alroe, Brisbane Airport Corporation (BAC) CEO and Managing Director, said, “We are honoured to have retained our title as the ‘best of the best’ in our region for the second year.

“The award for Best Airport Staff of course is a tribute to the front line staff, from airline and ground handling staff, to volunteers, cleaners, security, customs, immigration, retail, and maintenance staff, and everyone in between, who strive to provide the best possible services and facilities to travellers from across the nation and the world.

“Their passion and commitment to customer service is outstanding and BAC is very pleased to have strong partnerships with our local operators so we can work together to continually improve the passenger experience at Brisbane Airport.

“Most importantly, we’re incredibly proud that it is the passengers themselves who travel through Brisbane Airport that have bestowed this honour on us. There was no greater accolade than being voted the best by global travellers in the world’s most prestigious industry awards,” Ms Alroe said.

The World Airport Awards are the most prestigious accolades for the airport industry, voted by customers in the largest, annual global airport customer satisfaction survey. The Skytrax World Airport Survey is widely regarded as the quality benchmark for the world airport industry, assessing customer service and facilities across 550 airports. The survey and awards are independent of any airport control or input and are therefore an impartial benchmark of airport excellence and quality.

The 2017 Awards are based on 13.82 million airport survey questionnaires that were completed by 105 different nationalities of air travellers during the survey period. The survey operated from July 2016 to February 2017, covering 550 airports worldwide and evaluating traveller experiences across different airport service and product key performance indicators - from check-in, arrivals, transfers, shopping, security and immigration through to departure at the gate.