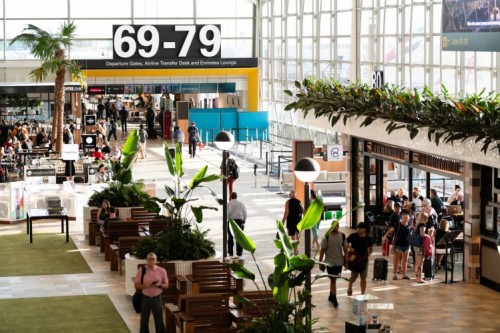 International traveller numbers grew by 266,182 to more than 6.3 million passengers for the calendar year, with a 2.2 per cent year-on-year increase in international seats recorded (+180,700 seats).

Domestic passenger volumes increased by 1.3 per cent to more than 17.7 million.

In total, BNE’s passenger numbers – domestic and international – grew by 2.1 per cent to more than 24.1 million.

“Brisbane as we know it is evolving and going from strength to strength thanks to a number of major infrastructure projects currently underway.

“With Brisbane Airport recording the strongest passenger growth amongst Australia’s major gateway airports, it is clear the rest of the world is taking notice of our great city and region and all it has to offer,” Mr de Graaff said.

“The growth in visitor numbers is good news for our city, with the latest International and National Visitor Surveys conducted by Tourism Research Australia showing record expenditure occurring in Brisbane by both domestic and international visitors.

“It is through the collaboration and the collective strength of government, tourism and industry partners in promoting the unique and world-class offerings of Queensland that we continue to see visitor arrivals rise,” Mr de Graaff said.

BNE’s busiest day for international passengers was on 21 December, with a record 23,063 arrivals and departures in a 24-hour period.

November had the greatest passenger growth with 41,991 additional passengers travelling through the International Terminal compared to November 2018.

New Zealand, China (including Hong Kong), and the United States (USA) were the top three international growth markets by volume. Overall direct seat capacity contributed to an additional 36,000 New Zealand passengers, and despite slower growth than previous years, there were an additional 20,800 Chinese passengers.

The United States of America visitor market (+10.5 per cent) also recorded strong year-on-year growth despite a reduction in direct seat capacity, with an additional 17,700 passengers recorded in 2019.

Capacity increases by both non-stop carriers contributed to growth in the Taiwan visitor market, returning to double digits (+10 per cent and an additional 13,500 passengers).

A record-breaking 63,525 arrivals and departures were recorded on 4 October, making it the busiest day of the year at the Domestic Terminal.

The month with the greatest passenger growth was April, with 65,738 additional travellers compared to April 2018.

Traffic on Western Australian routes increased for the first time in five years, with capacity reductions tapering off.

Intrastate seat capacity grew for the first time in six years, with Mackay, Cairns and Townsville gaining the most supply.

A milestone was reached on the Townsville-BNE route, reaching more than one million passengers in a 12-month period for the first time, equating to a 2.8 per cent year-on-year growth (+28,100 passengers).

BAC/BNE’s other notable achievements for 2019 include:

“This year is without a doubt the biggest in BAC’s history, with the practical completion of Brisbane’s new runway following eight years of construction,” Mr de Graaff said.

“The opportunities this will enable for Brisbane and for Queensland cannot be understated, and we will work harder than ever to secure new airlines, additional services and new destinations while building Brisbane as the nation’s gateway.”