Destination Brisbane to shine in India with Brett Lee

Destination Brisbane to shine in India with Brett Lee 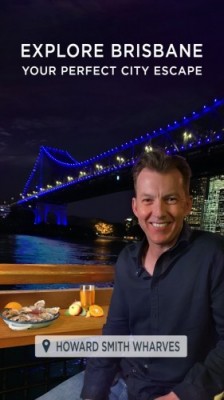 Brisbane Airport Corporation (BAC), in partnership with Singapore Airlines and Tourism and Events Queensland (TEQ), has launched its first ever direct-to-consumer marketing campaign promoting the city of Brisbane to the Indian market.

The campaign will air across television, digital and social channels from 15 October 2019 through to March 2020, with a competition element giving five Indian travellers the chance to fly to Brisbane on an all-expenses paid holiday to Tangalooma Island Resort.

India is one of the world’s fastest growing outbound travel markets with more than 300,000 Indians visiting Australia last year and more than 30,000 of those visiting Brisbane in FY19.

“With Indian travellers seeking new destinations in Australia to visit, Brisbane Airport is excited to partner with Singapore Airlines and TEQ to showcase the hottest new city with the help of cricketing legend Brett Lee.

“Singapore Airlines is an important partner for BAC, with four flights a day between Singapore and Brisbane, and provides excellent connectivity to the Indian market,” Mr Parashos said.

Mr David Lim, General Manager India Singapore Airlines, said, “We are excited to promote Brisbane in partnership with Brisbane Airport and TEQ through Brett Lee, who is one of the most recognised and celebrated Australian personalities in India.

“In the coming months, we hope to interest more Indians to travel to Brisbane by educating them on its diverse offerings,” he said.

“India is an economic partner for Queensland with great potential for growth. In the year ending June 2019, Queensland welcomed 79,000 Indian visitors which creates jobs in our tourism industry,” Ms Jones said.

“Brisbane offers a range of world-class tourism experiences boasting five-star hotels, a thriving cultural scene, world-class events and amazing food and wine, as well as being a stone’s throw away from a range of incredible nature-based experiences.”