BNE records lowest passenger numbers in a financial year since 1994

BNE records lowest passenger numbers in a financial year since 1994 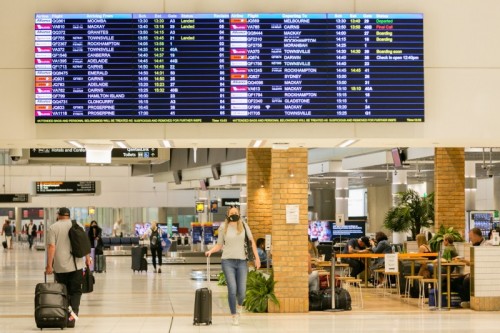 Wednesday 21 July 2021: For the first time since FY1994, passenger numbers at Brisbane Airport have failed to crack 8 million in a financial year.

FY2019 was Brisbane Airport’s busiest financial year ever, with more than 23 million passengers.

International passengers plummeted a staggering 95 per cent year-on-year (-4.4 million passengers) to just over 248,000, with international borders remaining closed except for the trans-Tasman travel bubble with New Zealand that commenced in late April.

Repeated lockdowns and domestic border restrictions across the states and territories resulted in a 43 per cent decrease in domestic passengers year-on-year (-5.7 million passengers), with just under 7.6 million.

“The COVID-19 pandemic is undoubtedly one of the toughest challenges the aviation industry has faced, but we have managed the financial losses better than many due to our significant intrastate network.

“Brisbane Airport continued to connect to 27 destinations across the State, sustaining the valuable resources sector by connecting FIFO workers to regional Queensland.

“We remain thankful for the strength of our intrastate market which has demonstrated the essential nature of aviation to the Queensland community and economy,” Mr de Graaff said.

Nonetheless, as the hub connecting Queensland to Australia, Brisbane Airport has felt the impact of significantly reduced interstate passengers not only to Brisbane itself, but also connecting through to regional destinations.

Mr de Graaff said the impact of COVID19 on international aviation was even more stark.

“As an island nation a mid to long-haul flight from most of its trading partners, Australia is uniquely reliant on aviation. Whilst we have managed through the last 18 months of this crisis with airlines and airports prepared to maintain air connections at great financial loss, this is simply not sustainable,” he said.

“It is essential that all levels of government recognise that as other parts of the globe normalise, the highly competitive international aviation sector may well leave Australia behind. Policies must be put in place to ensure Australia’s connectivity to the world is protected.

“We are eager to see the vaccination rates of Australians increase as soon as possible and move towards the ‘Consolidation Phase’ of the National Plan so we can allow vaccinated Australians to travel again, and vaccinated visitors to come to Australia.”

The lack of passengers meant that most of our international airlines were unable to operate in FY21, but there were a number of airlines that found a way to continue flying to BNE, including Qatar Airways, Emirates, Singapore Airlines, Air Niugini, Air New Zealand, Qantas, China Airlines, and EVA Air.

These airlines have been a vital cargo lifeline for Queensland producers and exporters to send our State’s high-value products to markets around the globe.

They also enabled the importation of thousands of tonnes of essential supplies and medical equipment into Australia and the exportation of life-saving medicines and supplies throughout the Pacific by the UN World Food Program, AusAID, and other donor countries.

It also ensured the delivery of COVID vaccines via BNE to locations across the Pacific, including Papua New Guinea, the Solomon Islands, Vanuatu, and Fiji.

Just above 100,000 passengers made use of the two-way travel bubble, with an average of around 1,400 international passengers a day.

In the days immediately prior to the suspension, passenger numbers reached more than 2,000 - the highest volume since the bubble opened.

“It is a complicated and expensive exercise to operate what is essentially two separate terminals within the International Terminal, one for ‘green’ flights to and from New Zealand and the other to play our part in helping Australians repatriate on ‘red’ flights from around the globe.

“We are the only airport in Queensland receiving ‘red’ repatriation flights and we take very seriously, and proudly, our role in getting Queenslanders home,” said Mr de Graaff.

The busiest day of the financial year at the Domestic Terminal was on Friday 14 May, with 42,471 arrivals and departures.

The quietest day was on Saturday 29 August, with 5,793 arrivals and departures at a time where Queensland’s borders were closed to Victoria, New South Wales, and the ACT.

Despite Sydney and Melbourne remaining the strongest interstate routes by overall passenger numbers, they both recorded a significant year-on-year decrease, falling 65 per cent and 71 per cent respectively.

The intrastate market remains 30 per cent below the pre-pandemic levels of FY19.