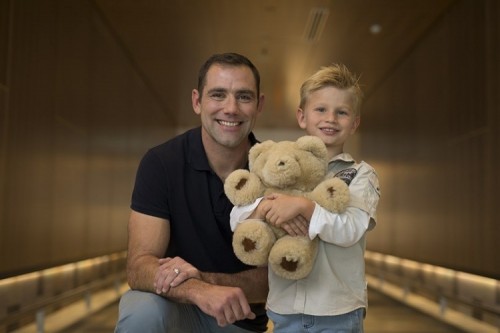 The campaign, the first of its type for an airport in Australia, will launch to local Queensland audiences with a television commercial (TVC) in the pre-match broadcast of the 2017 NRL Grand Final. It will then roll out across Queensland and Northern NSW, reminding locals that Brisbane Airport is their best choice for overseas travel.

The TVC follows a uniquely Queensland icon, the ‘Tambo Teddy’, which gets left behind at the terminal kerb as his family arrive at BNE. The BNE Champions work together to return the lost Teddy to its owner, Lucas, before he departs on his flight direct from Brisbane to Vancouver.

Stephen Goodwin, Acting CEO Brisbane Airport Corporation, said it was the first time the airport had taken to TV advertising in regional Queensland and Northern NSW.

“Brisbane Airport has completely transformed over the last few years and we felt it time, with all our new international services and our new runway under construction, that we take the message to the community that Brisbane Airport is Australia’s best airport and one of the best in the world,” he said.

“The campaign highlights the effort we put into customer service and the real pride we take in being consistently ranked by travellers as their favourite Australian airport.

“From Brisbane Airport travellers can directly connect with 83 destinations across the nation and the world, so there’s no need to travel to the southern capitals first and every reason for travellers to choose Brisbane Airport for all their domestic and international travel plans,” Mr Goodwin said.

Supporting the campaign TVC is a series of 30 second short form videos hosted by one of the most trusted names in travel Catriona Rowntree, promoting some of the most popular destinations direct from Brisbane including Bali, Shanghai, Taipei, Dubai, Hawaii, Bangkok and New Zealand.

Catriona Rowntree said, “I am truly honoured and excited to be a part of Brisbane Airport’s first campaign of this kind. As Australia’s leading airport it’s no surprise they want to showcase the great atmosphere is created with the village green, the busking, the great lounges, and of course the dining and shopping. I had a ball working with the BNE team and I’m looking forward to seeing what’s next in this exciting time for them.”

The TV and online campaign will run over a 12 month period.