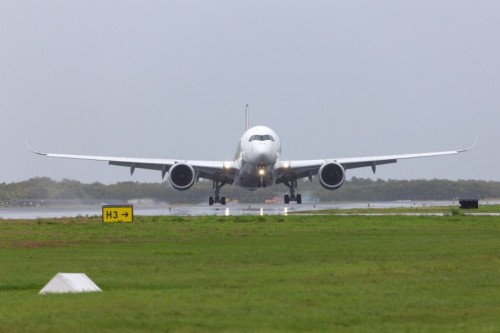 Singapore Airlines' A350 touch down at BNE 17 Oct MR

Singapore Airlines will offer more than 700,000 seats a year between Brisbane and Singapore when it adds a fourth direct service operating three days a week from late May 2016, with the aim of increasing it to daily later in the year.

“Singapore Airlines is the only international carrier to now offer four return flights on a single route to and from Brisbane three days a week, drawing in visitors from many countries across Asia and Europe.

“Each year Singapore Airlines carries more than half a million passengers to and from Brisbane, reinforcing its presence as a major contributor to Queensland tourism, especially considering its network breadth of 60 destinations in 33 countries.

“I congratulate Singapore Airlines on its significant contribution and commitment to Queensland over the years,” Ms Alroe said.

52 per cent of Singapore Airlines’ passengers travelling to and from BNE are international visitors. Of these, nearly 90 per cent originate in a country other than Singapore, with the key markets including the UK, India and China. The fourth flight will offer new Eastern Europe connections to passengers three days a week.

The importance of Brisbane Airport as the primary gateway to Queensland also cannot be underestimated.

“Brisbane Airport offers international airlines the necessary market to support inbound and outbound business and leisure passengers, the benefits of which ripple across the industry,” Ms Alroe said.

“Any additional services to Brisbane Airport will help boost the economy and will benefit all of Queensland as visitors often connect onto other popular intrastate destinations, as well as visiting local hot spots like the Gold and Sunshine Coasts,” Ms Alroe said.