Queen’s Baton to touch down at Brisbane Airport

Queen’s Baton to touch down at Brisbane Airport 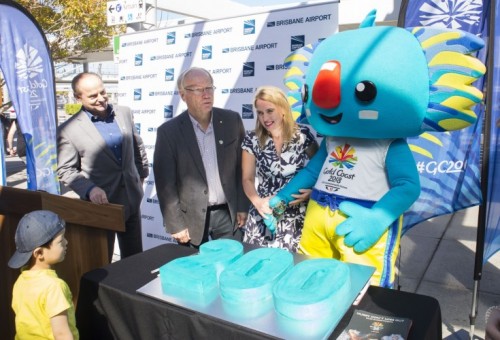 With 200 days until the start of the Gold Coast 2018 Commonwealth Games (GC2018) it has been confirmed the Queen’s Baton will arrive at Brisbane Airport (BNE) on Christmas Eve, 100 days before the Games begin.

Commonwealth Games Minister. Kate Jones said the Queen’s Baton would touch down at the Brisbane Airport in 100 days, 100 days before the Games commence.

“As the first port of call in Australia, Queenslanders will guarantee the Baton a warm welcome before it embarks on the 100-day journey across the country, visiting every state and territory on its way to the Opening Ceremony.

“When it arrives into Brisbane, the baton will have completed a 288-day expedition, sharing the Games dream with thousands of people across the Commonwealth, connecting the Gold Coast, Queensland and Australia with one-third of the world’s population.

“188 days into its 288-day international sector, the Baton has made its way across 45 countries, putting Queensland and the Gold Coast on the international map.

“And on Christmas Eve, there’s no better place to come home to than Queensland.”

Stephen Goodwin, BAC Acting CEO, said that the Corporation’s support for the tourism industry in Queensland, its partnership in major events and its role as the primary international gateway for visitors to the Sunshine State is a role BAC takes seriously.

“We recognise that Brisbane Airport is often the first and last impression of our city and state for international visitors and it will be the main gateway into Australia for the majority of international travellers arriving for the Commonwealth Games.

“This is why we’ve put an incredible amount of effort into improving the traveller experience at Brisbane Airport, with a focus on efficiency, ambience and choice that delivers the very best impression of Australia and the warmest Queensland welcome to visitors from all over the world.

“We anticipate around 70 per cent of the nearly 14,000 Games associated representatives including athletes and officials are expected to fly in for the Commonwealth Games to come through Brisbane’s International Terminal and we’re well prepared for their arrival.

“As part of the partnership with GOLDOC we’re working on detailed logistics for facilitating the smooth arrival and departure of thousands of VIPs, athletes, families and spectators making their way to and from the Games venues.

“Good news for our regular travellers is, while Brisbane Airport will be extra busy and a hive of activity, we foresee no operational impacts to the normal schedule due to our careful pre-planning and the staff and volunteers who will be onsite during the peak arrival and departure days,” Mr Goodwin said.

GOLDOC Chairman, Peter Beattie AC said the arrival of the Queen’s Baton at Brisbane Airport would be a terrific milestone event for the Games newest sponsor.

“We’re working very closely with BNE and our other stakeholders to ensure all participants have a wonderful experience and that starts when visitors be they athletes, fans or dignitaries touch down at BNE.

“These Games are the biggest event in Queensland’s history and I’m sure the team at BNE along with our volunteers will welcome everyone with a warm smile and ‘G’day mate, welcome to the smart state.

“With 200 days until the Games, BAC is a welcome addition to the GC2018 Sponsor Family which is now made up of 50 well known and respected brands.

“It will be great to have the Queen’s Baton back on home soil for Christmas as we start the final countdown to the Games and I look forward to working closely with BNE to ensure a smooth arrival and departure for all Games visitors.”

During The Commonwealth Games Brisbane Airport expects to facilitate: