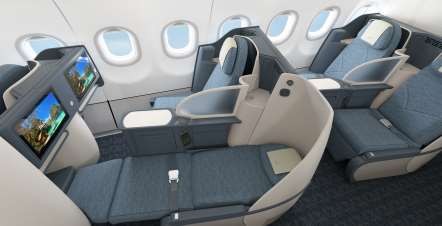 From 2 July 2018, Philippine Airlines will provide another Australian first, with the introduction of its A321neo aircraft on non-stop services between Brisbane Airport (BNE) and Manila.

The new four times weekly A321neo non-stop services will replace the current three times weekly A340 aircraft, and will be the first narrowbody operation to Australia offering a flat-bed business product.

“The introduction of these aircraft will result in a near doubling of current seat capacity for Brisbane travellers from approximately 38,000 to 70,000 seats per annum.

“With the Philippines one of the fastest growing economies and aviation markets in Asia, this new non-stop flight is sure to result in increased passenger numbers in both directions.

“Indeed, the investment and trust Philippine Airlines has made in making Brisbane its first ever A321 NEO destination demonstrates the confidence they have in the market potential,” Ms Alroe said.

Jaime J. Bautista, the President and COO of Philippine Airlines, expressed optimism in stimulating business and tourist travel from Australia and New Zealand, as the airline expands nonstop services from Sydney, Melbourne and Auckland in addition to Brisbane.

“Brisbane is an important part of our plan to introduce more Australians to the Philippines as a high-value holiday destination,” said Mr. Bautista.

“Philippine Airlines has just been certified as a 4-Star Quality Airline by the Skytrax global rating firm, and we are the only airline offering multiple nonstop routes from Australia and New Zealand to the Philippines.”

“We are thus investing in new A321NEO aircraft and building up a fleet that is among Asia’s youngest, to fulfil our promise of a more comfortable, enjoyable and distinctly Filipino travel experience for Australian travellers.”

“Philippine Airlines has an extensive network in Asia and having another direct service into the region will help Brisbane attract more visitors, grow investment and business opportunities, and boost our economy,” Cr Quirk said.

“The new service will also enhance our reputation as a New World City that has a clear focus on the Asia-Pacific.”

The Philippines as a destination offers travellers access to some of the world’s most beautiful locations, and is amongst ASEAN’s fastest growing economies.