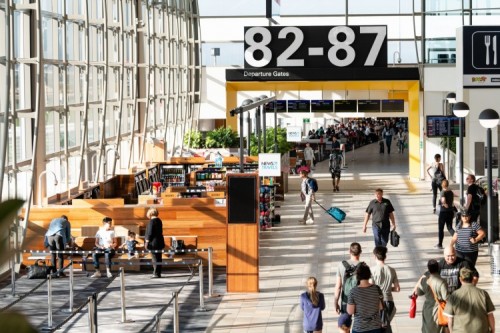 International traveller numbers grew by more than 277,000 to more than 6 million passengers for the calendar year, with a 5.5 per cent year-on-year increase in international seats recorded (+435,530 seats).

Domestic passenger volumes increased modestly by 0.7 per cent to more than 17.5 million.

In total, BNE’s passenger numbers – domestic and international – grew by 1.7 per cent to more than 23.6 million.

“The city is evolving before our very eyes with billions of dollars-worth of investment in infrastructure projects currently underway, including our new runway, a vibrant arts and major events sector, direct access to some of Australia’s greatest natural assets and a reputation for being a safe and friendly destination.

“It’s not all about South East Queensland, aviation growth in Brisbane brings benefits for regional Queensland and we remain committed to establishing improved connectivity between the city and other centres in Queensland, driving the visitor economy throughout the state.

“We aim to achieve this through continued collaboration and the collective strength of government, tourism and industry partners to promote the diverse offerings of Queensland to visitors and further the growth in arrivals,” Mr de Graaff said.

BNE’s busiest day for international passengers was 22 December with a record 22,689 arrivals and departures in a 24 hour period.

August had the greatest passenger growth with more than 40,000 additional passengers travelling through the International Terminal compared to August 2017.

Strong growth over Chinese New Year through to Hainan Airlines’ first anniversary of its Shenzhen service contributed to an additional 51,400 passengers in the China (including Hong Kong) market.

The United Kingdom (+5.2 per cent) also recording a strong year-on-year growth, with the Commonwealth Games driving an additional 14,700 passengers through BNE.

September school holidays were a catalyst for travel with 60,991 arrivals and departures on 28 September, making it the busiest day of the year at the Domestic Terminal.

The month with the greatest passenger growth was February, with 49,964 additional travellers compared to February 2017.

Overall interstate city pairs load factor improved by 1.1 percentage points to 81.3 per cent – the highest since 2011 (80.8 per cent), with average load factor exceeding 80 per cent on the Sydney, Hobart, Melbourne, Perth and Darwin city pairs.

BAC/BNE’s other notable achievements for 2018 include:

“The year ahead is an exciting and busy time for us, with Brisbane’s new runway entering its final construction stage and the finishing touches set to go on to the airfield,” Mr de Graaff said.

“It will be business as usual for passengers moving through the terminals, but they can expect to see extensive works and upgrades happening across the Domestic Terminal, with new retail offering and upgraded amenities opening throughout the year.

“It is more crucial than ever before that we continue collaborating and innovating with our airline, industry and business partners in growing BNE’s profile as the preferred gateway to Queensland and Australia,” he said.