From the Sunshine State to the Golden Gate

From the Sunshine State to the Golden Gate 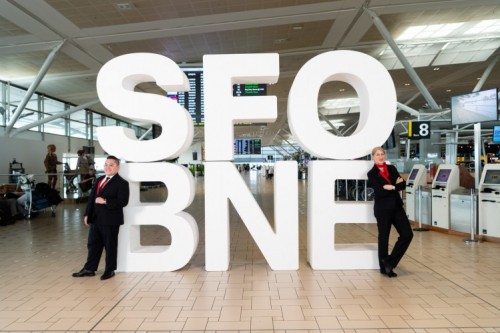 In an exciting commencement to 2020, new direct Qantas flights between Brisbane and San Francisco are set to take off from Brisbane Airport (BNE) today, establishing an additional link between Queensland’s international gateway city and North America.

The three times weekly service is expected to boost American visitation to Queensland, a market that experienced 10.5 per cent growth for BNE in 2019, despite a reduction in direct seat capacity.

“The US visitor market is currently the fourth largest for Brisbane Airport in terms of passenger numbers, with around 185,000 US passengers travelling through the airport last year.

“Relative to the size of the market and overall demand, Queensland has been under-served from the USA, so these direct Qantas flights will go some way to addressing pent-up demand.

“More importantly, the new services will help grow the critical North American market which will have flow on benefits for every sector of our economy, from business and investment to tourism, trade and education across all of Queensland.

“This is an exceptional result for the ‘Attracting Aviation Investment Fund’ and a true reflection of what industry and government can achieve together,” he said.

“Qantas’ ongoing commitment to our city and state is clear. Qantas has been a partner of Brisbane Airport for nearly 85 years, and I look forward to furthering this long and successful partnership, including celebrate the inaugural flight between Brisbane and Chicago in a few months’ time,” Mr de Graaff added.

“Today we’re launching Qantas’ newest service, which will be a soaring success for Queensland’s tourism industry.

“This service will see a boost of 73,632 inbound seats and $67.1 million for the Queensland economy over the next three years. It also means more than 700 jobs.

“We know direct aviation access is key to growing our state’s tourism industry and that’s why we’re continuously working with our partners to explore new opportunities for Queensland,” Minister Jones said.

“These new services will link Australian corporate and leisure travellers with two lynchpin capitals of commerce and culture in the United States. Customers will save around four hours travel time compared to the one-stop options currently on offer.

“From a US perspective, these direct routes put some of Australia’s most popular destinations like the Whitsundays just a one-stop flight away from a foggy San Francisco morning or a windy Chicago day, and that’s great news for Queensland and Australian tourism.”

Mr La Spina added, “It’s been a difficult start to the year for Australian tourism but new routes like this help to stimulate interest and bring more visitors.

“The message we’re sending to the US is that Australia is very much open for business and it’s easier than ever to get here.”