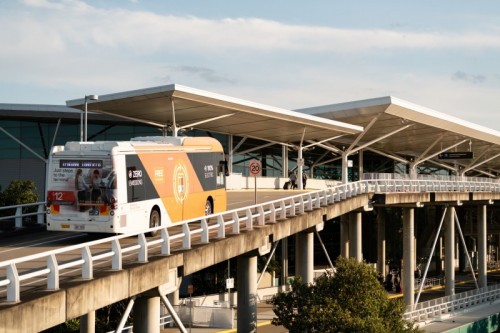 The theme for this year’s Green Airports Recognition was ‘Air Quality Management’, with BNE’s fleet of 12 electric buses and purpose-built charging station receiving the highest recognition possible in the ‘less than 25 million passengers’ category.

BNE’s fleet commenced operations in February 2018 and is the largest fleet of any Australian airport, covering landside transport operations across the airport precinct.

Following a competitive tender process, BAC awarded Carbridge the $5 million per year contract in June 2017 to exclusively build, operate, and maintain all aspects of the fleet.

Each bus seats 70 passengers and has a range of 600 kilometers, or up to 100 transfer journeys on a single charge, using kinetic power regeneration technology to produce charge as the buses decelerate.

By replacing the older diesel fleet, BAC is able to reduce approximately 350 tonnes of carbon dioxide and 200 kilograms of pollutants each year.

“We place our environmental responsibilities at the forefront of everything we do at BNE, and our electric bus fleet is an important example of our ongoing commitment to sustainable, greener initiatives.

“Another important aspect of the fleet is the improved passenger experience it delivers. Not only are the buses improving local air quality with zero tail pipe emissions, but they are also incredibly quiet, which makes for a more relaxing passenger journey.”

“Not only do these initiatives benefit the local airport community but by participating in the Green Airports Recognition programme, other airports in Asia-Pacific and the Middle East can benefit from these pioneering projects.

“We applaud Brisbane Airport for reaching top honours in the Green Airports Recognition programme and commend their environmental leadership.”

Now in its fifth year, The Green Airports Recognition aims to promote environmental best practices to minimise aviation’s impact on the environment and recognise airport members who have outstanding accomplishments in their environmental projects.